Why should Europe support minorities in Iran

Why should Europe support minorities in Iran

Following the latest situation in Iran, a conference has been held by the Arab Struggle movement for the Liberation of Ahwaz and EPP on January 30th to shed the light on the issue of Ahwaz and also that of the Kurdish minorities. One of the speakers Habib Jabor the president of ASMLA organisation and Saleh Kamrani an Iranian Azerbaijani lawyer and Human rights defender who was detained in Ervin prison in 2006 because he defended Iranian Azerbaijani which prevented him from exercising his profession and defending human rights and freedom of expression. 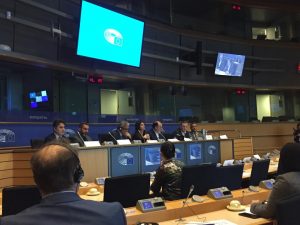 Habib Jabr, head of the Arab Struggle Movement for the Liberation of Ahwaz. He was born and raised in the city of Souss. He obtained a master’s degree in history in 1970 and worked as a teacher and then as headmaster of a school in Al-Ahwaz, the capital. He practiced the awareness-raising struggle in the importance of preserving the Arab identity and language that the Iranian occupation sought to obliterate and disrupt its culture and its character .He founded the Arab Struggle for the Liberation of Al-Ahwaz with a group of Ahwazi militants in 1999 which was operating as a secret organization within the occupied Al-Ahwaz. In April 2005 ,the uprising movement constituted an important detail in the movement’s course of action as a result of the exposure of the occupation plot targeting demographic change in it, while it was known as Abtahi’s document, and it was pursued by the occupation security forces. He continued his struggle through his communication with the leaders of the movement in Al-Ahwaz, and contributed to reshaping the movement’s activities abroad, as the movement’s president – he moved to Denmark in 2007 and obtained the right to asylum there.After the movement’s activity at home and abroad, and its international conferences and various activities to present the Al-Ahwaz issue, the Iranian regime tried to assassinate him in Denmark in 2018, and the Danish government announced the assassination attempt at a press conference in Copenhagen. He continued his national struggle under special protection by the Danish security. The Iranian regime pressured the Danish government to arrest him early in the second month of the year 2020 a few days after the European parliament conference under the pretext of spying for Saudi Arabia.

The ASMLA movement is recognized by the United States government and was invited to the the international conference held in September 24-25 2019 in New York under the title “The future of Iran’s Geography” in conjunction with the 74th session of the general assembly of the United nations. In addition to Alawaz, many forces opposing the Iranian state were invited such as the Turkish Azaris ,Qashiqis,Baluchis and Kurds and other forces opposing the iranian regime called iranian civil society organizations in America. Prominent international figures were present such as Mike Pompeo ,US secretary of state, Brian Hook, Joseph Lieberman, Mark Wallace, German Ambassador to America and former New York mayor Rudi Giuliani. This conference was an important step to meet the aspirations of the minorities in the region and support human rights and dignity.

Relegated to the margins of a society centered around the Persian and Shiite identity, Kurds, Arabs and even Baluchis are subject to discrimination and racism.

Minorities in Iran make up between 40% and 50% of a population of 80 million. They are the heirs of a long history shaped by discrimination. Many face deleterious living conditions marked by the forced closure of their businesses, barriers to housing, employment and education. Discrimination against them is enshrined in law. Article 115 of the Constitution thus provides that only a Shi’a can access the presidency of the Republic. Other articles deny them the right to practice their language in schools, universities and the media. This cultural examination is a source of tension with the central government. In April 2018, nearly 400 Ahwazis were arrested for participating in protests in response to the broadcast of a children’s program on public television that had erased the Arab population from the map of the country.

The regime justifies the marginalization of minorities through a discourse which makes them “enemies of the interior”. Using the same rhetoric as in foreign policy, the Islamic Republic swears by conspiracy. The authorities thus perceive behind the last demonstrations against the power a conspiracy led by the United States with the help of opposition groups, some of which belong to minorities, such as the Kurds in the North-West or the Arabs in the South  -Where is. Through official media, the regime often portrays the Khuzestan region as a hotbed for “terrorism”, a breeding ground for enemy Sunni extremist groups to finance and train. 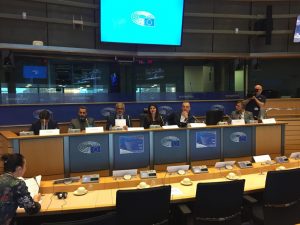 While all Iranians are today hit hard by the economic crisis, minorities are even more so since they have been marginalized for years.  This is the case of the Baluchis who live in the Sistan-Balochistan region, bordering Afghanistan and Pakistan, and the poorest province in the country.  Mostly Sunnis, most of them live below the poverty line.  This is also the case for the Kurdish regions, which are among the least developed in Iran.  Ditto for Khuzistan, an area rich in oil and gas, whose population hardly harvests the fruit of these resources.

If the political and economic exclusion of minority groups dates back to the time of former monarch Reza Shah Pahlavi (1878-1944), the advent of the Islamic Republic in 1979 marked a turning point. While the previous regime aimed to culturally homogenize the country while integrating it into the Western fold, the ideology which succeeds it maintains Persian centrality, but by placing it in a Shiite theocratic framework.

As for the Azeri minority, the largest in the country, if it too suffers from linguistic discrimination, a large part of it identifies with the central government, even more since the election of Ali Khamenei.

Since its creation, Europe has always been a supporter of human rights, freedom of speech and a defender of fragile minorities. Giving the opportunity to minorities to speak about their struggle and suffering under the Iranian regime is a proof that freedom of speech is one of the main values of the European union .