[Based on a report done by ASMLA organisation]

On Wednesday  October 21st ,a webinar entitled – “The American elections and the future of minorities in Iran” was held and transmitted live on several Arab channels  aswellas Ahwazna.net and Azerinews.The webinar was moderated by Ms. Manel  Msalmi,  EU Adviser on MENA and president of EADM.  The panelists  were high-level speakers based inn the EU ,Israel and the US.

The webinar started by the keynote speech of Mrs. Dalia Al-Aqidi ,a Senior Fellow at the Center for Security Policy, former TV host and journalist as well as candidate at the Republican party .  She highlighted that the nuclear issue of Iran is connected with its pursue of death  iran  and that we should be “shedding light on circumstances other than the Persians and their expectations in resolving Iranian threats.”  She mentioned the Iran ideal and how “President Donald Trump’s opposition to the Iranian government and how the nuclear sanctions it imposed on Iran have been very successful in creating more stability in the Middle East.”On the contrary ,Biden’s policy is a continuity to Obama’s policy in the region by supporting Hezboallah and the Muslim brotherhood. “The whole world needs to cooperate in protecting the region and fighting the Iranian government.  In addition, she mentioned  “Joe Biden’s management policies that are similar to the Obama administration” and her belief that “Biden intends to rebuild close relations with Iran and enable it to gain more power and thus more terrorist activities.” She also added that “through Qassem Soleimani, thousands of people were killed, and Iran had the largest role in spreading and supporting militias in other countries such as  Muslim Brotherhood who arrives in North Africa ”. Mr. Eli Pieprz , Political Advisor , Former Director of Political Campaign in the United States, and president of the Kenyon Group from Israel kicked off his presentation through two important aspects of campaigning which include 1. What the Candidates say and 2. What they fear to say.  He stressed that “by strengthening the force, it will be possible to achieve peace, and this weakness can never lead to peace and that Trump has the required strength.”  Then he continued to talk about “the negative influence of Biden in following Obama’s approach with regard to Iran and thus creating harmful policies.”  He also revealed that “despite the fact that nearly 75% of American Jews support Biden in the upcoming elections, Israel supports Trump.”  In addition, he noted, “Biden’s campaign rejected foreign policy being a problem, and that Trump was able to prove that he is a man of principles by solving very complex issues in the East such as the Arab-Israeli peace deal.”The historic peace deal is a validation of peace through strengh.There is a strong message from the Trump administration “not tolerating human rights violations “.US sanctions comes as a support to protesters in Iran as well as minorities seeking freedom and justice. Dr. Khalaf Al-Kaabi, Chairman of the Foreign Affairs Committee and the Arab Struggle for the Liberation of Ahwaz, began his speech by focusing on the importance of 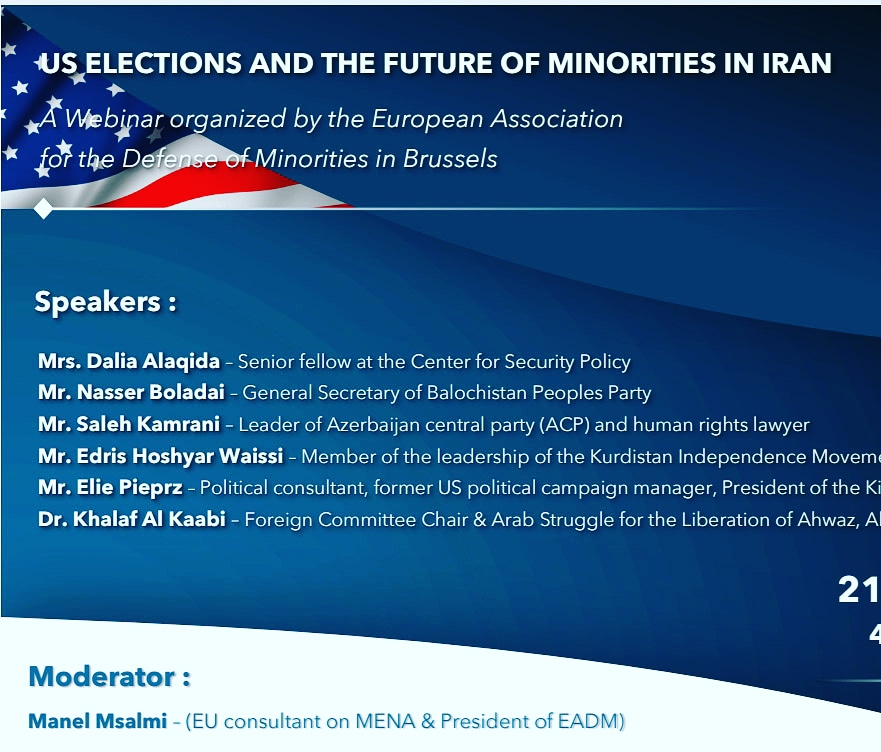 humanity and equality with regard to differences on the basis of color, gender, religion, nationality, and so on. “We need to respect humanity, not nationality,” he said.  In addition, he stated, “People in Ahwaz are suffering a lot due to the intense Iranian pressure to change their language, traditions, and identity.  Then he expressed his appreciation for the perseverance and strength of the people in the face of such pressures.  , Affirmed that according to international law, we have the right to live in the land of our ancestors, even though Iran robbed us of this right. ”  After that, he said, “The region needs political leadership to overcome Iran’s threats, and President Trump’s support is beneficial to all because he has proven that he is a good businessman and a successful politician, who has been able to enhance the political balance in the Middle East.  He added that non-Persians are in fact the majority as they make up about 80% of the population, and he expressed his sorrow for Iran’s torture and its violations of non-Persians.  And, he mentioned that President Trump can normalize relations in the Middle East through peace agreements, grant confidence to others, and his assertion that relations are better than wars.  He also indicated that President Trump may succeed in creating many jobs in the United States and hopes to win these elections so that he can achieve balance in the region and destroy the arrogant regime in Iran. Finally, he said that life is precious, beautiful, but short.  We need to get rid of dictatorship and consolidate lasting peace, as it takes centuries to build something and takes a second to destroy.Mr. Salih Kamrani, Head of Central Policy of Azerbaijan (ACP), Human Rights Advocate,began by expressing his happiness at the current place that Israel occupies in the Middle East.  He also said, “If we get our freedom, we will follow the same relationship with Israel, as Israel has demonstrated its goodwill as a friend by supporting minorities.”  He also mentioned that “Iran deleted the name of Azerbaijan in order to achieve its foreign political interests.”  The situation in Iran is getting worse day by day, as the economic situation in Iran and the recession have led to the emergence of hunger among the people.  Because Iran was investing money in terrorist organizations.  Fortunately, Trump’s sanctions have been very successful, although some countries have been helping and supporting Iran. ”  He pointed out that the banking sanctions helped reduce the financial resources that Iran provides to the militias, expressing his support for President Trump and his sanctions on Iran, and rejecting Biden’s administrative policies.  It is time to open our eyes to really see Iran, as 80% of the population is not actually Persians.  During the Obama presidency, these people were unable to obtain any help or support.  But during the Trump presidency we had successful seminars especially in New york last year and at least we had the opportunity to express ourselves.  As a leader, I have aspirations and hopes for the Azerbaijani people. ”Mr. Nasir Bolday, Secretary General of the Balochistan People’s Party, began his presentation by viewing Iran as a multinational culture that makes up more than 60% of the non-Persian population.  Iran is fully prepared for change. ”  In addition, he claimed that “both the Shah and Khomeini were discriminatory regimes, as during the Shah’s regime Iran classified everyone as Persians and never paid any attention to the non-Persian nations.  Also, during the Khomeini era, the regime viewed Iran as a Muslim country only, regardless of other religious minorities. ”  He also spoke about “Iranian terrorist activities that have created disabilities in the region through the proliferation of militias in other countries such as Iraq, Syria, Yemen and Lebanon.”  It intends to do the same in Saudi Arabia, Bahrain and other neighboring countries.  They also showed their desire to destroy Israel. ”  Finally, he said: “We have a common goal with the European Union, and therefore we need to work with them to overcome Iranian threats.  Because European countries are sometimes unaware of what is happening in Iran in relation to non-Persian countries.  It will be possible for European states to make the necessary changes in the Middle East through cooperation with non-Persian peoples.  Therefore, we need union and cooperation to solve these issue.

Mr. Idris Hoshyar Weissi, a member of the Kurdistan Independence Movement leadership, began his presentation by referring to “Biden and Obama’s policies towardsuIran.”  He also discussed Trump’s ability to destroy Iran’s power and consider issues related to minorities such as the Kurds in Iraq and Syria.  After that, he claimed that “Qassem Soleimani was the biggest terrorist in the region since 2003, and this negatively affected Iran’s influence in Iraq on the entire region.”  He stated, “Only about 30% of the Iranian population are Persians.  And that Iran is only interested in serving the Persians.  Therefore, it is our right to take back our lands. ”  In addition, he stated that Biden will follow the same policies that Obama implemented and aim to make Iran strong in the region.  But in return, Trump was able to deliver more of what he had promised and established the Arab-Israeli Peace Agreement for the first time in history. ”  He added, “Through the cooperation and support of Israel and Trump, we will be able to achieve more stability and peace.  Hence, we hope Trump will win this election.  Obama promised many things, but was only focused on promoting and supporting Iran, Hezbollah, Hamas, and other terrorist organizations.  Biden will certainly do the same.

To conclude , Mr. Elie Pieprz was given  the floor again and said that he was pleased to see different perspectives.  Then he talked about the importance of supporting both the Persian and non-Persian population in Iran.  Then he referred to new oil deals between the UAE and Europe that will be transferred via Israel.  He was also very confident of Trump’s successful policies in bringing about the necessary changes and hoped to see a new and different Iran. ”  Ms. Dalia Al-Aqidi  added that Trump intends to change the Iranian regime.  And that his sanctions in Iran have been very successful in sending less financial resources to terrorist organizations. However,the USA will not repeat the same mistake it committed in Iraq by doing military intervention in Iran.  The change should come from the iranian population. She also mentioned Iranian companies that consistently lobby and support Biden’s campaign, and encouraged all politicians in the European Union and Washington DC to raise awareness and develop lobbying groups to oppose the Iranian government.  Finally, the webinar concluded with Ms. Manel Msalmi who pointed out that The opposition in Iran and non-iranian representatives should do The same in Brussels and sensitive the European parliament about The human rights conditions there and The need to bact via resolutions and that “The main objective of this webinar is to raise awareness about  and human rights issues and got contribute to peace and stability in the region ”