A webinar entitled “Nuclear deal impact on the Middle East” was organized on Wednesday, April 14th fromn10 to 12 to address the issue of Iran deal following the Vienna Talks. The webinar was host by Mep Fulvio Martusciello and moderated by Manel Msalmi, president of the European Association for The Defense of Minorities.

The introductory remarks of Mep Martusciello reminded us of the effects of going back to Iran deal on the region especially the minorities who suffered from the regime terror and human rights violations. A nuclear-armed Iran would strengthen Iran’s aggressive policy in Syria, Lebanon, Iraq, and Israel through its proxies such as Hamas and Hezbollah. Arab leaders of the Coalition of people victims of Iran’s terror as well as its leader Mr. Saeed Hamidan highlighted the techniques used against dissidents mainly espionage and kidnapping apart from human rights violations. The non-Iranian minorities such as Baluchis Ahwazis, Kurds, and Azeris as well as neighboring countries like Iraq, Syria, Bahrain, and UAE stressed the fact that a nuclear-armed Iran would be disastrous for the Peace and security of the region as well as the environment. Mr. Elie Pieprz from Israel’s  Security and Defense forum reminded us that Iran violated the JCPOA agreement which was signed in 2015 and that the EU and the US can no longer trust Iran and should work together with the Middle East for Peace and Stability. Sid Lukkssen, a historian and philosopher highlighted the fact that both the US and the EU failed to implement a practical and coherent policy to curb the nuclear ambitions of Iran. To make such a policy, we must understand the religious and demographic identity of Iran. Allowing a nuclear arms race within the volatile Middle East is a bad idea. 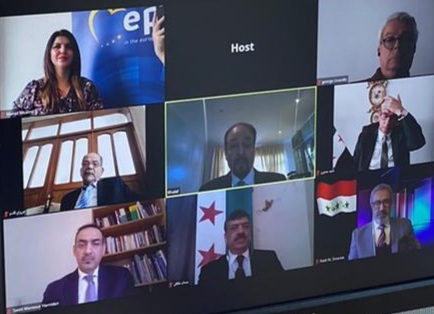 Dr. Khalaf Al-Kaabi, head of the Foreign Affairs Committee at ASMLA stressed the fact that The most dangerous problem is the nuclear agreement with Iran is that it is a state that does not respect the law and its neighbors and tries to dominate over their states, killed and displaced millions of Syrians, Iraqis, and Yemeni people, and killed thousands of innocent Ahwazi, Baluch, Turks and Kurds within Iran’s geography.

Mr. Faisal Fulad from Bahrain Representative of the Arab Gulf and Director of the Human Rights Office in the Coalition, expressed the importance of global humanitarian cooperation in human rights issues, as they are Gulf and human rights organizations that commemorate the anniversary of the genocide (the Holocaust) of 6 million Jews during World War II for the first time in the Arab world. He mentioned that Iran’s terrorism, starting from the first day of the revolution, the occupation of the US embassy in Tehran, the occupation of the three Emirati islands and its ambitions in Bahrain, the export of terrorism, and the formation of terrorist militias, Hezbollah in Lebanon, the Popular Mobilization Forces in Iraq, the Revolutionary Guard in Syria, the Houthis in Yemen, and Saraya al-Ashtar and al-Mukhtar in Bahrain.

The moderator concluded that with regard to security and environmental issues, the EU and the US should think seriously about the consequences of the Iran nuclear deal on the non-Iranian peoples as well as the neighboring countries because it would involve severe consequences such as climate refugees, terrorism and probably a nuclear war between countries of the region which would have a disastrous impact on our planet.