Ahwazis protest to support detainees in Denmark and the Netherlands but also political prisoners in Iran arrested unfairly and persecuted by the regime.

Ahwazi citizens in Germany announced that they will go on a hunger strike, starting on Monday 20 July 2020.

They emphasized that their strike came in protest against the continued detention of Ahwazis in Denmark and the Netherlands, namely Habib Jabr, his brother Nasser and Yaqoub Hor, and the media and TV presenter on the Ahwazna channel, Issa Fakher. 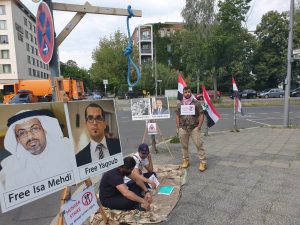 They further explained that preparations are continuing between all Ahwazis to work collectively to confront the Iranian effort to liquidate the Ahwazi cause by putting political pressure.

The Ahwazi in exile stressed that the battle of the hunger strike is a message to the Iranian regime and its partners that the path will not be interrupted.

They further pointed out that the strike is not the last way in the journey  of the Ahwazi struggle, but rather a step in a long process so that the world knows that the Ahwazi issue will not die.

The Arab minority in Iran believes that the journey towards justice and freedom goes through peaceful means and demonstrations and that the European values of equality and liberty which inspire the Ahwazi cause  can only be achieved through peace and solidarity with the other persecuted minorities and the Iranian population as well.

Peaceful demonstrations on July 24th in Brussels and in Berlin in parallel will be organised in front of the Danish embassy to show solidarity with the detainees.