Brussels, 14/09/2022 | İmralı F is a closed maximum security prison on İmralı Island off the Turkish coast in the Sea of Marmara for individuals. It was built in February 1999 specifically for the Kurdish leader Abdullah Öcalan, overriding national and international law. Since then, the prison has been operated on the basis of special status and using special practices. Within the framework of the so-called intensified prison regime, several people have been detained in the prison for a long time under extraordinary isolation conditions: the Kurdish leader Abdullah Öcalan for 23 years and Hamili Yildirim, Ömer Hayri Konar and Veysi Aktaş for seven years. The lawyers of the detainees call this kind of detention the “İmralı isolation system”.

The lawyers stressed that despite the fact that these rights are guaranteed by the Constitution, international conventions and national legislation, the rights of detainees to see their lawyers and family members, to communicate with them by telephone and to communicate with the outside world by letter, fax and other means of communication have been suspended. The prison on İmralı Island is a place where fundamental rights and freedoms have been systematically violated since the day it was established, he said.

Since 25 March 2021, the lawyers of the detainees have not received or been able to receive any messages from their clients on the island. Consequently, they have not received any information about their health, detention conditions, measures and developments related to the pandemic, the legal situation of their clients and other issues since then. According to the lawyers, the fact that the four detainees are currently being held incommunicado raises serious concerns as to whether their physical and mental integrity is still protected under the current circumstances.

Following the imposition of the state of emergency in 2016 and the numerous legislative decrees that followed, a new authoritarian and repressive regime was established in Turkey. This regime brought about a multitude of changes in the legal, political and administrative spheres. Accordingly, the lawyers explained, 2021, like the previous period, was characterised by a lack of legal certainty and unpredictability. The available legal monitoring mechanisms remained ineffective.

The representatives of the İmralı detainees demand, in accordance with national and international law, that family and lawyer visits of Abdullah Öcalan and the other three detainees be allowed again without delay and that their lawyers be informed immediately about the condition of their clients. They further demand that the rights of the detainees be respected and that their safety and health be taken care of, and that a policy of dialogue and negotiation on the Kurdish question be pursued, as it was in the years from 2009 to 2014.

Hundreds of lawyers from 22 countries, it concluded, have joined this demand and written to the Ministry of Justice of the Republic of Turkey to complain about the restriction of the right of Abdullah Öcalan and his fellow prisoners on İmralı Island to access their lawyers. 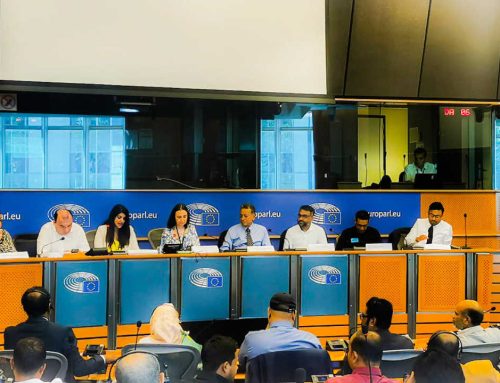 Democracy under threat and human Rights violations in Bangladesh Gallery

Democracy under threat and human Rights violations in Bangladesh