A demonstration place today in front of the European institutions with civil society and human rights organizations in Europe as well as the Bengali organizations who came to pay tribute to the victims on this 50th anniversary and ask for EU and UN recognition.

It is a tribute to the Bangladesh Hindu genocide of 1971 and a tribute to the 2-3 Million victims who were killed including 200 -400000 women who were raped. We need to remember this genocide incident 50 years later and never forget the brutality of this massacre in which Hindus, Muslims, Christians and Buddhists in Bangladesh were oppressed and tortured. The Hindu community lost its land and was slaughtered by the Pakistani army .Raping the Hindu women following a Fatwa in Pakistan was really inhumane and barbaric especially that they were killed after being raped. Today, we yearn for a global Acknowledgment of this genocide mainly because it remains unrecognized in comparison to the other genocides in Europe and Africa.

Today following women’s History month, we want to pay tribute to these war heroines who fought during the war of independence in 1971. In her book “A review of war heroines speak: The Rape of Bangladesh women in 1971 war of independence”, Dr Nilima Ibrahim worked for 25 years to publish a narrative of rape victims by interviewing them after the war. The narratives mirrors the violence of society against women and the subordination of the female victims mainly during the war. Rape was used as a weapon to subjugate women.

Dr Rabbe says that « in these quiet narratives, the young women and children clearly express :how they went from idyllic childhood to the horrors of genocide ;how they continued to  leave with painful memories and social exclusion after the war « .it is a whole generation with young women and girls who sacrificed themselves during the independence war and lived with physical and psychological abuse as well as an obsession on  the part of their families and society concerning the detailed descriptions of their rape incidents .

Dr Nusrat Rabbe pointed out that Rape as a weapon of war has not been recognized by the international community. Rape and sexual violence have to be recognised by international law and as a war crime which was the case for the first time in Yogoslavia in early 1990s , 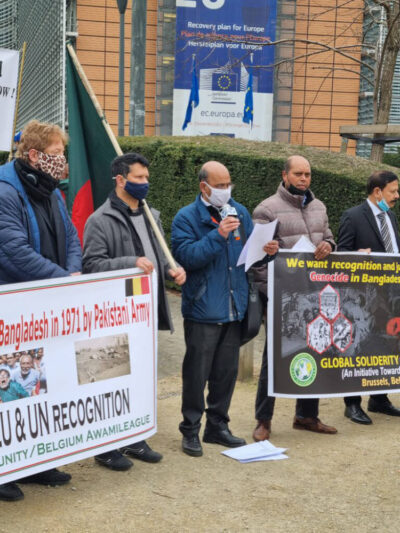 Unfortunately, religious conservatives have played a horrible role in inflicting violence upon  women .Victims are forced to marry the rapist by the court .it was a physical and psychological violence and pressure on victims who sacrificed themselves for the country .

The  horrific genocide attempted to take away the cultural ,religious and economic dimension of Bangladesh  .Robert Payne says « There were not the small casual killing of young officers who wanted to demonstrate their efficiency, but organised massacres conducted by sophisticated staff officers ,who know exactly what they are doing .Muslim soldiers ,sent out to kill Muslim Peasants, went about their work mechanically and efficiently ,until killing defendless people became a habit like smoking cigarettes or drinking wine « (Payne Massacre p29 )

However,there are always people who stand for the truth and for justice ,a Pakistani reporter Anthony Mascarenhas wrote an article about the Genocide which changed history .He  wanted to stand up for the truth and he risked his life and that of his family .His  article was considered as a betrayal to  his country and he was even accused of being an agent .

Another book which was an extraordinary and powerful piece ,a kind of a Diary of Anne Frank, it tells the story of a mother who lost her son and recalls all the massacres of the Genocide. The diary focuses on political and domestic issues .

The Bangledeshi Genocide reminds us that we are all humans band that we should respect each other including our cultural heritage, language and religion .The conflict based on a linguistic and religious level can never be solved by violence ,war ,persecution and torture because at the end the oppressed people always seek to find freedom and dignity even though they lose their families and lands ,they will always defend their values and identity .Today we need to remember these victims but also learn from the past and build a better future for the next generation based on brotherhood, coexistence, peace and stability.

Andy Vermaut, member of AIDL and organiser of this demonstration pointed out that “3 million people were killed in Bangladesh in 1971 in an organized genocide. More than two hundred thousand girls were brutally raped. “The old patterns of behavior of the Pakistan of yesteryear, has scarred the people of Bangladesh to this day” “The wounds are impossible to heal if the world does not dare to officially recognize the horror of 50 years ago” “I ask for a general pardon from all member states in the face of inaction on the scenes Bangladesh has faced” ‘I wish to apologize on my own behalf for what the international community failed to do, thus causing so many casualties’. I hope you can muster the spiritual and moral sense of duty to do”

We  should never forget those who sacrificed their lives for their nation .women and men who saved the country and built a new  generation and tried to overcome their fears and their frustrations by going further and carrying on their journey of survival. We should never forget people who stood for the truth and transmitted the stories of Holaucaust survivors and witnessed the massacres .We should always remember that we all belong to humanity and that our differences can bring us together.

As famous Bengali poet Rabindranath Tagore says « patriotism cannot be our final spiritual shelter ;my refuge is humanity .I will not buy glass for the price of diamonds ,and I will never allow patriotism to triumph over humanity as long as I live ”