Thursday 30th 2020,a  conference for the ” Al-Ahwaz liberation Movement”  was held at the European Union headquarters in Brussels following the regional developments in the Middle East and particularly the Iranian  uprising.

With the presence of a number of European parliamentarians, Arab parliamentarians, Ahwaz delegations and others belonging to non-Persian peoples this Thursday , the conference organised by EPP and host by Mep Fulvio Martusciello together with  the Arab Struggle Movement for the Liberation of Al-Ahwaz and moderated and organised by Manel Msalmi ,journalist, human rights activist and advisor on MENA issues in the European parliament . 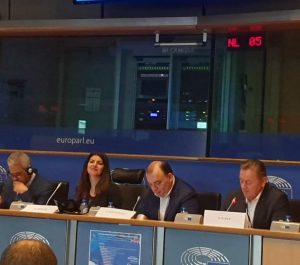 The conference opened with a speech from European Parliament member Mr. Fulvio Martiello, which included a presentation of the violations of the Iranian regime, human rights, and its terrorist role at the regional and international levels. At the European Union headquarters, we told them: We are with just causes. ”

Then the head of the Arab Struggle Movement for the Liberation of Al-Ahwaz, Mr. Habib Jabr, presented evidence of the real war the Ahwazi people are being subjected to, the most recent of which was the massacre committed by the Iranian occupation during last November’s protests, and Habib demanded that the leaders and officials of the Iranian regime be tried for their crimes against Ahwaz, at the International Court of Justice.

Meanwhile, the Secretary-General of the Azerbaijani Central Party, Mr. Saleh Kamrani, stressed during his speech the necessity of the international community to take deterrent measures for the Iranian regime, and stop his hand from conquering the peoples under his rule.

With the participation of Arab parliamentarians, such as the Bahraini MP, Dr. Mohammed Al-Emadi, and the Vice President of the Arab Lawyers Union, Dr. Dokhi Al-Habban, to support the presentation of the Al-Ahwaz issue before a number of European Union representatives, who met to see details of what is happening against the Al-Ahwaz people, and the rest of the peoples under the rule The Iranian regime. 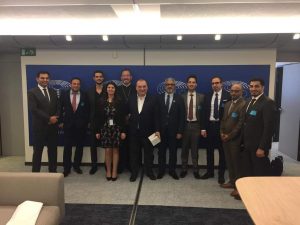 The conference ended with a meeting with The Vice president of the European parliament Fabio Massimo Castaldo with a small delegation headed by Mep Fulvio Martusciello and advisor Manel Msalmi together with the president of the Arab movement for the liberation of Alahwaz Habib Jabor and the spokesman of the movement Jacob Hor and they  discussed the means To support the Ahwazi people and help them get independence. It is the first time that the Ahwazi issue was discussed in the European parliament and supported by a group of European parliamentarians ready To defend human rights ,gender equality and freedom of speech in the region.