On January 3rd and 4th 2022, a series of demonstrations took place in Europe mainly in Antwerp, Brussels, and Geneva but also in Hong Kong to ask for a diplomatic boycott of the Beijing 2022 Winter Olympics and to send a message to the Chinese government that human rights and minorities rights, as well as freedom of speech, are crucial.

BoycottBeijing2022 was the motto of all these European civil society organizations which called for a  diplomatic boycott for the Beijing Winter Olympics and asked  EU  political leaders to join this movement. During the demonstrations, there was also a debate at the Brussels Press Club moderated by EU Today editor Gary Cartwright with high-level speakers and experts.

The debate was opened by MEP Peter van Dalen, a keynote speaker who criticized a lot the Chinese government’s policy towards minorities. He believes that representatives of EU member states’ governments and EU agencies must stay home in February. For him, these games offer an opportunity to publicly condemn China’s crackdown. The EU should not present this “propaganda victory” to the Chinese Communist Party (CCP), he added. 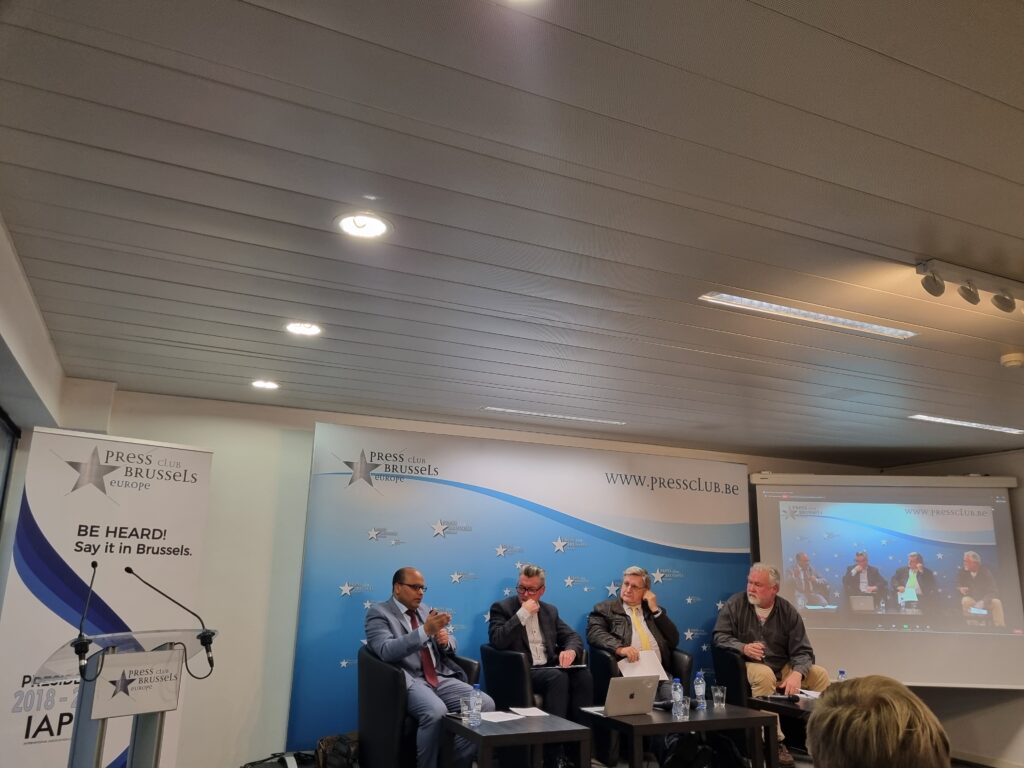 Benedict Rogers, Chairman, and Co-Founder of Hong Kong Watch mentioned the case of Hong Kong democratic activist Chow Huntung, who allegedly instigated an unauthorized rally in 1989 to commemorate those who died in the crackdown on Tiananmen Square and around Beijing against Chinese protesters.He was imprisoned for 15 months.

The director and the co-founder of Human rights without frontiers Willy Fautré spoke about the totalitarian regime of China and its policy towards minorities. He introduced the term “sinicization” which imposes the assimilation of minorities by denying their culture, language, and heritage. This technique is used by the communist party to assimilate the Uighurs, Tibetans, and Christians.

The sinicization of Christians involves controlling churches and Christian minorities.

Kashmir People’s Party politician Sajid Hussain mentioned China’s activities in his country  “My country is occupied by Chinese troops. China’s true intentions are now clear. The PLA is in Pakistan’s occupied Jammu to control the region militarily and diplomatically.・ I wanted to build a foothold in Kashmir (POJK). Nearly 11,000 Chinese soldiers have been dispatched to POJK, suggesting that Pakistan has given China de facto control of its territory”

Manel Msalmi, the president of the European Association for The Defense of Minorities expressed her relief after Belgium and some other countries joined the diplomatic boycott”Belgium will not send government officials to Beijing in 2022 to form alliances with Britain, Lithuania, the United States, Australia, Canada, and New Zealand. She evoked the situation of Minorities and women mainly the Uyghurs and the Tibetans but also freedom of speech and media repression in HongKong”It is clear that China violates human rights and individual freedoms, including freedom of speech, religion, belief and thought, by persecuting minorities  such as the Uighurs and the Tibetans” 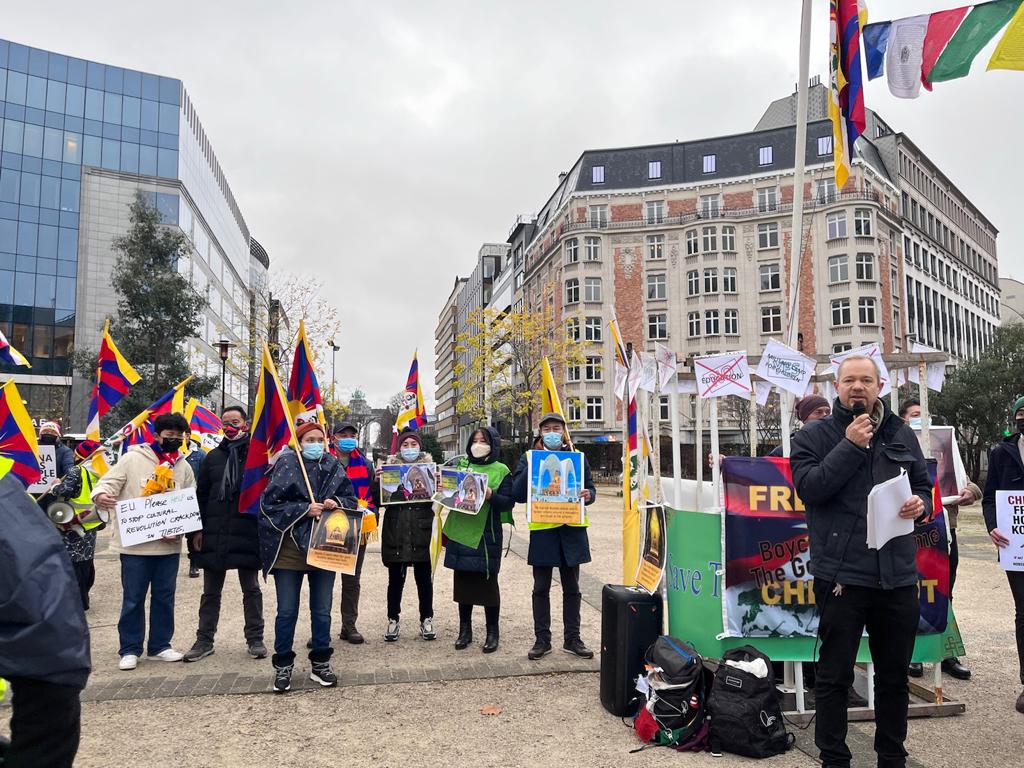 Communist opposition leader  Huang Hai Nguyen warned of the dangers of self-satisfaction in dealing with China. “People in many countries, including Vietnam, welcome the Chinese model, not the democratic model. The CCP has committed genocide crimes  against Uighurs, but the Islamic world is still silent because of China’s wealth”

Stefan Singer of Climate Action Network International gave an example of the use of Uighur forced labor by China. He points out that 50% of the world’s polysilicon used to make solar panels is made in China’s Xinjiang Uygur Autonomous Region, “up to 50% is likely to be made by forced labor. “. It maintains the market share in the solar panel market against the backdrop of falling prices and rising labor costs.

Andy Vermaut, a spokesperson for (AIDL) International Rights and Freedom and Defense Alliance (AIDL), spoke in front of the Industrial and Commercial Bank of China’s Brussels office. He evoked Climate change and the fact that we cannot overcome environmental degradation without doing everything possible to significantly reduce China’s emissions. After  Paris Agreement and  Glasgow, China’s CO2 emissions are still rising . In other words, China is responsible for some of the current climate disasters.

Koen Stoop, EU Policy Coordinator for the Uyghur World Congress described the deterioration of China’s human rights situation  as “unprecedented.” “China is not really the place to host these Winter Olympics,” he said.

The demonstrations and the debate were followed by a series of interviews which will be published in China’s opposition mainstream media and European journals in order to put more pressure on international leaders to join this movement and denounce human rights violations in China. 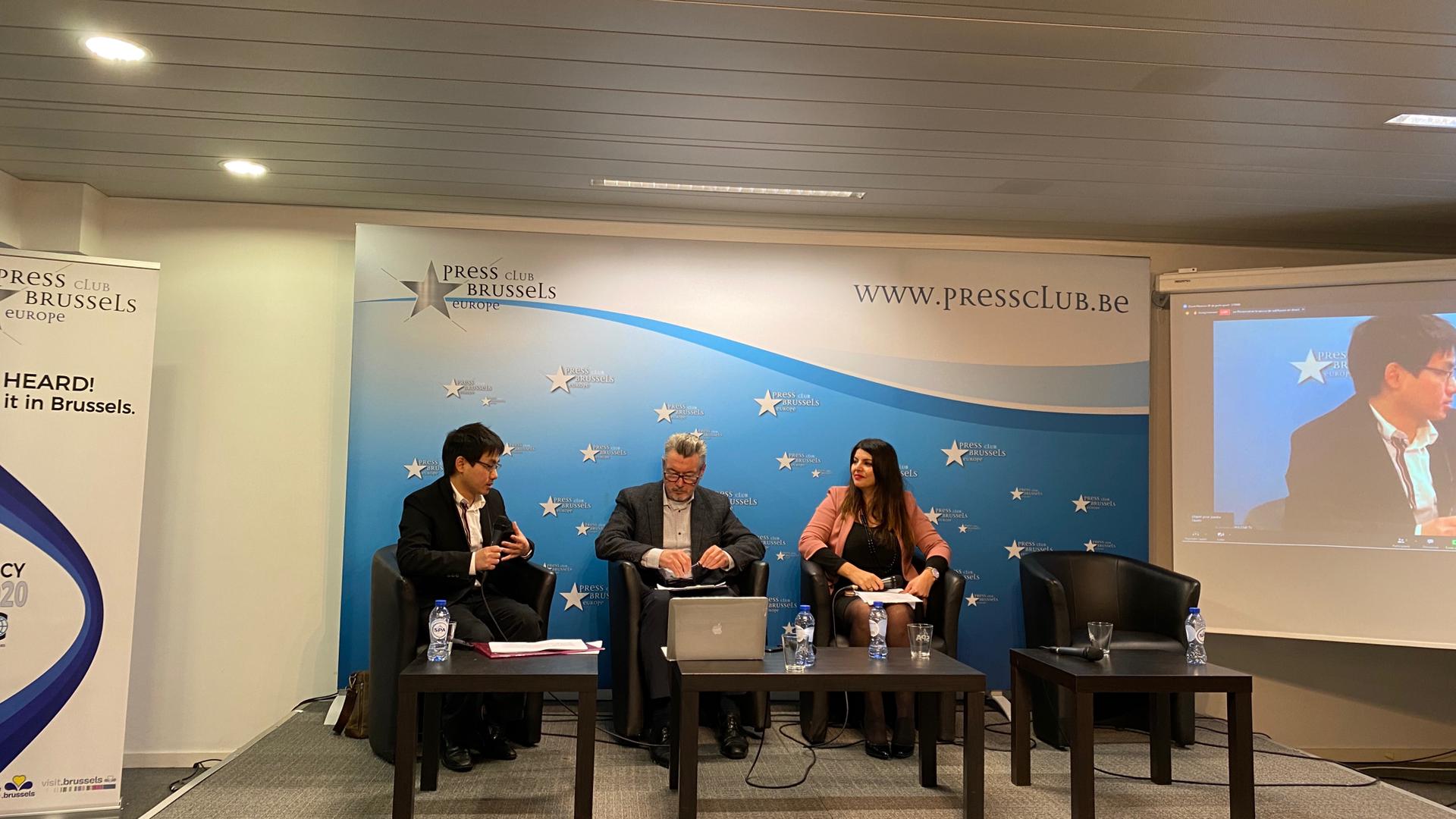